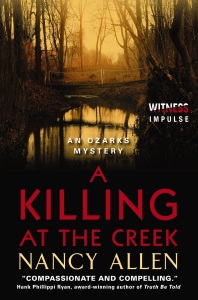 Nancy Allen made waves with her first Ozark mystery. The second goes on sale on February 17. But here, you can check out the first chapter right now!

Prosecutor Elsie Arnold loves her small-town home in the Ozark hills, but she’s been waiting for a murder to come along and make her career. So when a body is found under a bridge, throat cut, Elsie jumps at the chance to work on the case, But when the investigation reveals that the deceased woman was driving a school bus, and the police recover the vehicle, its interior covered in blood…the occupant and only suspect is a fifteen-year-old boy. Elsie’s in for more than she bargained for.  START READING…

The bloody yellow school bus wound through the hills of the Missouri Ozarks in the early dawn of a June morning. The blood inside the bus pooled under the driver’s feet, trickled in the aisle, drained out the back exit and ran over the rear bumper.

The young man at the wheel kept his eyes on the road as he maneuvered the vehicle up and down twisting roads shrouded by oak and sycamore trees, looking for the turnoff that would lead him back to the Interstate.

The road flattened out as he approached the Oklahoma state line. Shortly after crossing into Oklahoma, he spotted a McDonald’s, built atop and over the highway, spanning all four lanes of I-44. He took the exit and drove into the parking lot.

He could have parked at a distance from the other vehicles, but didn’t bother, pulling the bus into the open spot nearest the door. Reaching into a duffle bag, he pulled out a handful of money and shoved it in his jeans pocket.

His shoes tacky from the mess in the bus, he made prints on the pavement as he walked to the entrance. He paused to wipe his feet on a black nylon mat. A flight of stairs led up to a bathroom; he made that his first stop. The boy took care to wash his hands, rubbing them vigorously with the pink liquid soap, watching the rust colored water circle the drain. The mirror in the bathroom showed that his dark brown hair needed shampoo, and his eyes were red-rimmed, with dark circles from the long night.

He kept a neutral expression as he left the toilet. Passing an ice cream stand, he paused to examine the contents in the refrigerator case. A white haired woman in a hairnet, armed with a metal scoop, let him look at the buckets of ice cream in the case for a minute before asking, “You want something?” The boy stalked away without looking at her, toward the McDonald’s counter to order. Though there were no customers ahead of him, he had to wait while two uniformed

cashiers held a whispered conversation, two young girls laughing. One girl, a short blonde in heavy makeup, with four studs in one ear and two in an eyebrow, finally noticed him standing there. She leaned on the counter and said, “Can I take your order?”

“Want to try the Mac Wrap?”

He shook his head. “I want what I ordered.”

Something about him made the girl take a half step back. She spun around and pushed a button to pour his Dr. Pepper. Her friend, a pretty Cherokee girl with long black hair, looked behind the boy and said, “Hey, big shot, you’re tracking mud in here. Don’t you know they make us mop that up?”

He didn’t respond. He dug in his pocket and pulled out a wad of money, mostly ones, and counted out the exact change for his order.

“For here?” the blonde girl asked him, in a more respectful tone. He nodded. She hastily set his food on a tray.

He took the tray to the video arcade, and ate his food in a leisurely fashion. Pumping quarters into the machines, he held the sandwich while he played with one hand. He lingered for half an hour, nursing his drink.

When he departed, a fry cook was walking out into the parking lot at the same time. “Hey, man,” the fry cook said to him, “can I have a light?”

The pocket of the boy’s white t-shirt clearly revealed a pack of Camel cigarettes and a Bic lighter.

The cook bristled and grabbed the young man by the arm, but he ripped his arm away and turned with such ferocity that the cook backed off. Stepping backwards, raising the palms of both hands, the fry cook said, “No problem, dude. Forget about it.”

The young man jumped behind the wheel of the bus and threw it into reverse; before he drove off, he rolled down the driver’s window and thrust his arm out, extending the middle finger of his left hand.

The young driver’s arm disappeared inside the bus. He grappled under the seat, then brandished a blood-stained item in his hand for the cook to see.

It was a bloody knife.

The cook took one look and ran like hell back toward McDonald’s as the school bus took off for the highway.

Click here to buy the book and keep reading!

Nancy Allen is a member of the law faculty in the College of Business at Missouri State University. She practiced law for 15 years, serving as Assistant Missouri Attorney General and as Assistant Prosecutor in her native Ozarks. When Nancy began her term as prosecutor, she was only the second woman in Southwest Missouri to serve in that capacity. During her years in prosecution, she tried over 30 jury trials, including murder and sexual offenses, and she served on the Rape Crisis Board and the child protection team of the Child Advocacy Council. She lives in Missouri with her family.

1 thought on “A KILLING AT THE CREEK by Nancy Allen”