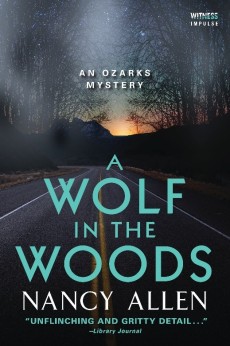 Seated at the counsel table in the Associate Circuit Court of McCown County, Missouri, Elsie Arnold watched the judge toy with the file folder before him on the bench.

Judge Calvin ran a hand through his prematurely silver hair. “I’m binding him over, ladies. But it’s a close call.”

Elsie heard her co-counsel, Assistant Prosecutor Breeon Johnson, exhale with relief. Elsie wanted to echo it. The judge was right; the preliminary hearing on the felony assault was not an open and shut case. Their victim was a homeless man who had been inebriated at the time of the attack; and though his injuries were grievous, his testimony was spotty. Seemed like he’d forgotten more than he could recall.

After the judge left the bench, Elsie twisted in her seat to check the clock at the back of the courtroom. “That ran long.”

Elsie snorted. For a county prosecutor, the idea of overtime was a fiction. As salaried public servants, they routinely worked long hours with no additional compensation.

The women exited the courtroom and walked the worn marble stairway down to the second floor of the century-old county building. Their footsteps echoed in the empty rotunda. The McCown County Courthouse, an imposing stone structure, had graced the center of the town square of Barton, Missouri, for over a century. While other county seats in southwest Missouri had opted to build new structures, to accommodate twenty-first century demands of security and technology, McCown County voters stubbornly clung to the old facility.

“Not quite. My baby is waiting for me in my office.”

At the bottom of the stairway, they exchanged a look. Elsie didn’t need to speak the obvious: Breeon’s daughter would be highly impatient with the delay.

But who could blame her? Taylor was a fourteen-year-old kid. Hanging around the empty courthouse was a snooze. Breeon, a single mother who hailed from St. Louis, Missouri, tried to keep regular hours. While Bree was a dedicated prosecutor, her devotion to duty was bested by her devotion to her teenage daughter.

Elsie, on the other hand, was a local product: a Barton, Missouri, native. Still single, at the age of thirty-two. And still enjoying her extended adolescence.

As they entered the McCown County Prosecutor’s Office, Breeon made a beeline for her office. “Tay-Tay! I’m done, hon.”

Elsie poked her head into the open doorway of Breeon’s office. Taylor sat behind Breeon’s desk. Her hand was on the computer mouse.

With a sulky face, she said, “Finally. I’ve been bored af.”

Elsie’s eyes darted to the wall. The af abbreviation was a common sight in her texts. And her tweets. So much speedier than actually spelling out the words.

“Baby, have you been on my computer?”

“Yeah. Just for something to do.”

“Taylor, it’s the county’s computer. We’re not supposed to be on it for personal use.”

Taylor spun in her mother’s office chair and stretched her coltish legs across the tiled floor. “I was just doing some homework. Looking stuff up.”

“Well, remember to stay off it from now on. We don’t want Madeleine mad at us.”

Madeleine Thompson, who held the title of Prosecuting Attorney of McCown County had been known to get her nose out of joint for smaller offenses, Elsie thought.

To lighten the mood, Elsie said, “Taylor, your mom says your birthday is coming up. Just around the corner. I can hardly believe you’re almost fifteen years old.”

Taylor’s eyes lit up. “Mom, I know what I want for my birthday.”

Breeon was digging in her briefcase, sorting through files. “You already told me. Those rain boots in purple.” Bree glanced at Elsie. “Do you know what Hunter rain boots cost? It’s a crime.”

Elsie shrugged. When she was a teenager, rain boots weren’t even a thing—not in Barton, Missouri. On rainy days, she’d walked around town with wet shoes on her feet.

Taylor spoke again, with a challenge in her tone. “Yeah, well, I changed my mind. I want headshots.”

Breeon zipped her bag. “What?” she asked, incredulous.

“Headshots. By a photographer. A real one.”

Curious, Elsie stepped through the office doorway and dropped into a chair facing Bree’s desk. “What do you want pictures for? You don’t need your senior portrait till after your junior year in high school.”

“Is this for the yearbook?” Breeon asked.

“Not the yearbook. For modeling.”

Elsie and Bree both burst into laughter; but when a cloud crossed Taylor’s face, Elsie tried to choke it back.

Taylor’s face was stormy. “You think I’m too ugly to be a model?”

Breeon stepped over her daughter’s outstretched feet and ran a gentle hand over the girl’s hair. “Oh honey. You’re beautiful. And smart, and talented, and strong.”

“Baby, we’re in the Ozark hills of Missouri. Even if I wanted you to be a model—you can’t be one here. There’s no modeling industry around here.”

A glance out of the window behind Breeon’s desk provided the truth to her claim. Tree-covered hills rose up in the distance, behind the town square where the courthouse sat. Barton, Missouri, the county seat of Barton County, Missouri, was a tiny town in the hill country of the Ozarks.

A bare whisper escaped Taylor’s downturned head. “Maybe there is.”

Elsie said, “Why would you want to be a model? They don’t get to eat.”

Undeterred, Elsie continued: “They have to starve. And their career is over before they hit thirty. And they don’t get to use their brains; they are human clothes hangers.”

Without acknowledging Elsie, Taylor bent to pick up her backpack. “I wanna go home, Mom. We have a game tonight. Coach doesn’t like it when I’m late.”

“Sure thing.” Breeon shot Elsie a pleading look over Taylor’s head. “Can you lock up, Elsie? Taylor needs to be at the gym by six thirty to warm up, and I have to fix something for her to eat.”

Taylor spoke up, with a look of anticipation. “Are we going to the grocery store? I want to get the new Cosmo.”

“No, we’re not. But I got you something better.” Bree rummaged on her desk, pulling up a manila envelope. “It came in the office mail. I wanted to surprise you.”

Taylor tore open the package. A paperback book fell out onto the desktop. She picked it up with a listless hand. “What’s this?”

“Alice Walker. My favorite of her novels. You’re such an advanced reader, I think you’re ready for it.” She kissed Taylor on the forehead, then turned to Elsie. “So you’ll lock up?”

“No problem. Hey—I’ll probably see you all over at the school gym tonight.”

“Well, I’ll be there for the ninth-grade boys’ game. I’m meeting Ashlock, since his kid’s on the team.” With an effort, Elsie kept her voice upbeat. She would much prefer to meet Detective Bob Ashlock, her current flame, in a darkened barroom after work. “But I’ll try to get there early, so I can see your team, too.”

Elsie stepped over to Breeon’s desk to pick up the felony hard file they’d handled in Judge Calvin’s court while Breeon packed up her briefcase. Taylor bolted out of the office, with her mother following. Breeon’s voice called out as their steps retreated down the hallway. “See you later, Elsie.”

Elsie flipped through the file and set it down. Giving the desk a final glance, she saw that Bree’s computer was still turned on.

Their boss, Madeleine, had recently sent an office wide email, instructing the employees to log off and shut down the computers at night. It was her new “green” policy.

Elsie leaned over the desk and clicked the mouse, preparing to log off Bree’s computer. Images popped up on the screen. Elsie leaned in to examine it.

It looked like a link for a modeling agency, pitching glamorous jobs for girls from twelve to twenty-five. Elsie shook her head. “Taylor, Taylor,” she murmured.

Idly, she skimmed through the text on the screen. It promised that the agency could make a young woman’s dream of fame and fortune come true, through an international modeling career. Elsie clicked the mouse to expose the bottom of the page, pausing to study a selfie of the agent in charge. It depicted a dark-haired man with a tattoo on his neck. He wore a smarmy grin.

A chill went through her; she grimaced. It set off a buzz in Elsie’s radar. The man in the picture was not the type of individual that a mother would want sniffing around her teenage daughter.

She turned off the computer and got ready to depart. Before she turned off Breeon’s office light, she glanced down at the trashcan near the door.

At the top of the garbage was the brand new Alice Walker paperback novel. Elsie reached into the wastebasket to rescue it; but it had fallen on the remains of Breeon’s lunch. Mustard and ketchup smeared the cover. Elsie dropped it back into the can and headed for the women’s room to wash a streak of ketchup dripping from her fingers.

Click HERE to buy the book and keep reading!

From A WOLF IN THE WOODS, by Nancy Allen, published by Witness Impulse, an imprint of William Morrow. Copyright © 2018 by Nancy Allen. Reprinted courtesy of HarperCollinsPublishers

Nancy Allen practiced law for 15 years as Assistant Missouri Attorney General and Assistant Prosecutor in her native Ozarks. She tried over 30 jury trials, including murder and sexual offenses, and is now a law instructor at Missouri State University.