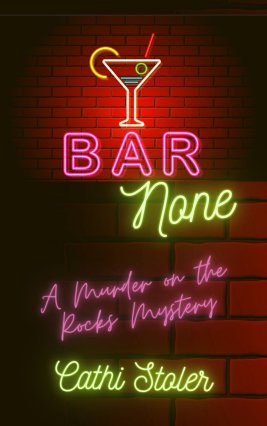 Somebody had to do it and that somebody was me. The Corner Lounge was my bar and cutting fruit was my job. Even the satisfying heft of the big steel blade slicing through soft skin and pliant flesh like a guillotine chopping off a head didn’t make a difference. Cutting fruit was a horrible job, and I hated it. I had bags of it to get through. Mounds of oranges, lemons and limes all needing the deft touch of my knife to turn them into a pile of colorful wedges and curls destined to garnish Margaritas, Cosmopolitans, Martinis and the like. All so they could finally disappear in the garbage with the toss of a wrist. Work that left me with nicked fingers still stinging hours later. Really, it was a lost cause. One that I got to repeat every day.

It was ironic when you thought about it, given that my name was Jude. I couldn’t imagine what my parents could have been thinking, well, my Catholic school-reared mom that was. Did she believe saddling her baby girl with the name of the saint people call on when all else fails, when they’re desperate, when they literally might not have a leg to stand on, would trick fate and keep me safely out of harm’s way?

I had to say it didn’t work out exactly according to plan. Not with life, so far, or for my bar and restaurant either. The Corner Lounge wasn’t a lost cause; it just seemed that way sometimes. Like when I tried to keep my partner happy, the tables full and my creditors at bay.

I loved the bar business, really I did, and I was pretty good at it. When I opened The Lounge, I had a vision of a comfortable, friendly spot where people could hang out at the bar, get a good meal and listen to some live music on the weekends. A vision? Okay, maybe a bit of that St. Jude vibe did rub off on me. After all, everyone needed a little help now and again, right? Especially when three o’clock rolled around and it was time to cut fruit. I usually had company while I performed this chore, my buddy Sully, who occupied his favorite bar stool while I got the place ready for business. Today he was a no-show. Now, where was St. Jude when I needed him?

After I finished my cutting chores and the fruits of my labor were stored in the covered containers at my station and at the service bar on the other end, I moved on to the rest of my daily pre-opening tasks. Next up was checking the bottles on the back bar and in the speed rack and replacing the empties while Jimmy, my barman, brought up ice and new kegs from the basement for our beers on tap.

When all of the booze was accounted for, it was time to wipe down my beautiful carved wood and brass bar extravagance. It held pride of place in The Lounge and I’d designed my décor around it.

The back bar was fashioned from a series of antique mirrors supporting glass shelves and lit with pin lights that showcased our premium brands of vodka, tequila, gin, rum, whisky and Scotch as well as the more trendy spirit offerings. I’d had the walls painted a soft, pearl gray with randomly placed hand-rubbed streaks of silver that cast a subtle shimmery glow over the space. The room was finished with a mix of plush gray, high-backed banquettes with sleek black tables and soft post-modern floor lamps and sconces that made The Lounge feel just different enough to be cool, yet comfortable enough to make my customers want to linger for a while.

Sully walked in just as I finished polishing the bar before the after-work crowd arrived for the five to seven Corner Lounge Social Hour.

“You’re late. My fruit and I missed you.” I tossed him an errant lemon that had escaped the block. Sully caught it and sat down on his stool—the corner one nearest the window—and I reached for the bottle of Jameson behind me. “What kept you?” I poured a good measure of the Irish into a rocks glass and placed it on a coaster in front of him.

“Had to stay late at Big City.” He was referring to his place of business, the Big City Food Coop. “One of the trucks conked out just as it pulled in after the late deliveries. I waited with the driver until the mechanic showed up. It’s always something.”

Sully was in charge of deploying the trucks and vans that transported the Food Coop’s largess from its base at the Hunt’s Point Terminal in the Bronx to points all across the city. It was a volunteer job, but he did it with a precision and perseverance that bore witness to his former days in the Marines. To hear him tell it, no needy, hungry person in the five boroughs would get fed without him. He drove his beat-up old Toyota up to the Bronx five days a week like clockwork. Sully’d been doing it for a few years now and, despite his grousing about the admin, obviously thrived on it.

As he picked up his drink and took a sip, his cell beeped. “Work. He pushed the button to answer it. “See what I mean.”

I moved down the bar to give him privacy while he spoke then returned a few minutes later when he clicked off and noticed the look of irritation on his face. “Trouble?” I tilted my head toward the now quiet phone.

“Could be. One of the guys in accounting, Ed Molina, asked if he could meet tonight to talk. Wants to discuss something important he discovered in the office.” Sully toyed with his glass. “Said he just missed me this afternoon and it’s important he see me.” He shook his head. “He sounded nervous, scared even. I tried to get him to tell me what’s on his mind, but he insisted we meet in person.” He checked his watch. “He’s driving down from the Bronx and coming to the apartment a little later. I need you to do me a favor.” Sully knocked back the rest of his drink. “I’ve got to go down to Saint Ann’s and see Aunt Mary tonight. It’s her ninety-second birthday.”

Sully’d been taking care of his mom’s sister for a while and tried to visit her whenever he could. St. Ann’s Home was downtown a little ways on the end of Grand Street.

“I told Ed to stop in here and you’d give him my key so he could let himself in if he gets here before I get back.” He took his key ring out of his pocket, removed his house key and handed it to me. “I should be home by eight, but if I’m not, he can wait upstairs.” He turned his glass upside down on the coaster and rapped his knuckles on the bar, signaling he was finished—something he’d done ever since I’d known him. “Ed sounded really antsy. So be nice, okay?”

“Sure, but do you trust this guy?” I studied Sully’s face for a sign. “He’s not just looking to make trouble?” Every business had its malcontents and maybe this Ed was one of them. If not, what could be going on at the Food Coop that could be so dire?

I nodded in sympathy and tried to keep my skepticism out of my voice. “Alright. Stop in after he leaves and let me know what’s going on. I’ll buy you a night cap.”

He walked away from the bar and a shiver passed through me like someone had just walked on my grave. Sully reached the door, turned around and looked straight at me, almost as if he felt it too.

CLICK HERE to buy the book and keep reading!

BAR NONE is available at Amazon, B&N and fine booksellers everywhere.

Cathi Stoler is an award-winning author. Her new Urban Thriller, BAR NONE, A Murder on the Rocks Mystery, featuring The Corner Lounge bar owner, Jude Dillane, will be published this October by Clay Stafford Books. A new series, with Blackjack player, Nick Donahue, includes the novel OUT OF TIME, and the novella, NICK OF TIME. Both will be published next year by Black Opal Books. She is also the author of the three volume Laurel & Helen New York Mystery series, which includes TELLING LIES, KEEPING SECRETS and THE HARD WAY, and a three time finalist, and winner of the 2015 Derringer for Best Short Story, “The Kaluki Kings of Queens”. Very involved in the crime writing world,  Cathi serves as Co-Vice President of Sisters in Crime New York/Tri-State, and is a member of Mystery Writers of America and International Thriller Writers.
Connect with Cathi at: