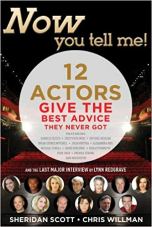 When you walk into an audition, the most important thing to know is that the people sitting behind the table are not your enemies or adversaries. As a matter of fact, they are dying for you to be the right person for the role. It makes their job easier and makes them look good–casting director, director, choreographer–everyone.

I have found that the most difficult directors are not those at the top or at the bottom of their craft, but those in the middle. The same is true for actors. The bottom ones (in small community theaters, for example) are so happy to be working and those at the top are confident in their abilities. However, as with anything, there are grand exceptions on both ends of the scale. If the director is incompetent, I just nod my head and say, “Yes” to their advice, then do my own thing when it comes down to the performance. Of course my preference is to work in concert with a director and find the ways we can trust each other and be mutually supportive. I have had the good fortune to work with great directors for most of my career. How do you work with good directors? Listen and learn and trust.

The best actors have taught me how to listen. How to prepare. How to treat others around you with kindness and respect. And to continually work on your craft and yourself.

On the other hand, there’s a lot you can learn from bad actors as well! For example, the deleterious effect of selfishness and not being prepared. That fear kills comedy (and tragedy, too, for that matter). Of course, you’d rather learn such things while on stage.

Acting is a living art that changes and deepens as you change and deepen. Never stop learning. Never lose your curiosity or love of life.

Stay in class, certainly, and study–but also read, go to museums, allow everything to inspire and fill you up. Be open to life and to new experiences and to new people and to change.

When it comes to moving between film, television and stage, my motto is, “Go where I am wanted.” The more you can do, the more you work. Each medium has different subtleties in technique, although the basic technique remains the same: find the truth in your character. I call television and film “short form art” that favors those who are spontaneous and good at improvisation. Stage is “long form art” that favors those who are good at delving into the nooks and crannies of a piece and character over (hopefully) a long amount of time. In fact, when you’re in a long theatrical run, doing the same part again and again, keep exploring the nooks and crannies of the role. I like to say that art is in the spaces. A great artist continually explores those spaces.

And yes, no matter which form you’re working in, the mind-set is the same–do the best work you can at the time.

Habits of the Successful Actor

While I truly believe that the difference between a talented actor who makes it and one who doesn’t is luck, lucky actors, by and large, tend to be those who constantly work on their craft, trying to find new ways to explore their art. Tenanciousness helps. Big time.

When Is It Time to Pursue Something Else?

Give up acting as a career when you become bitter and frustrated and find yourself hating life and your career and yourself. I am a firm believer that it is a good idea to rewrite yourself every now and then.

It’s easy to manage your money when you have none! What is hard is when you have some. Never spend more than you have: if you can’t pay off your credit card completly every month, you are spending beyond your means and getting yourself into debt. As you make more, you can spend more.

My second rule is to be sure you always have some “F.U.” money set aside so you don’t have to take jobs you don’t want!

Which Jobs to Take

I have turned down a lot of jobs I didn’t think were going to lead me to where I wanted to go. I’ve never done soap operas, for instance. At one time I was offered more money than I had ever made to be on a soap. But personally, I don’t like them; consequently, I would have been very unhappy doing it. I also noted that soaps can be hard to break out of once you get on them or become pegged as a soap actor. That said, soap actors are some of the hardest working actors in show business. There are some very good ones, so this is no slam to them, just a personal choice.

I also would not want to portray someone who was insulting to a race or group of people without the piece’s having a greater purpose or working to a greater good.

There are also personal and family consequences to be weighed. Part of choosing the life of an artist means that you can’t always do what you want when you want. And sometimes a good career choice can be difficult for one’s personal life and vice versa. Those are decisions that each person must make for themselves.

In general, the criteria I hold for parts that I accept are: first, is it something in which I can excel? We don’t usually get the parts in which we can’t excel, anyway, so that is not a big worry. Second, I prefer parts that lift the human spirit or illuminate something about the human condition–if not the individual part, at least the piece as a whole.

I want to celebrate being human–in all our glory and pathos. It is my hope that when I leave this planet I will have done more good than harm.

Click HERE to continue reading advice from your favorite actors such as Eden Sher, Sam Waterston, David Oyelowo and others!

Dubbed “the Last Leading Man” by the New York Times, Brian Stokes Mitchell has enjoyed a rich and varied career on Broadway, television and film, along with appearances in the great American concert halls. His Broadway career includes Don Quixote in Man of La Mancha (Tony Nomination and Helen Hayes Award), Fred Graham/Petruchio in Kiss Me Kate (Tony, Drama Desk and Out Critics Circle Award), Coalhouse Walker Jr. in Ragtime (Tony Nomination) and many more. On television and film, he his recent apperances include The Path, Mr. Robot, Jumping the Broom and Glee.

Other actors who share their experiences and advice in the book are:

and the last major interview by Lynn Redgrave

The book was compiled by Sheridan Scott, Chris Willmand and Todd Coleman